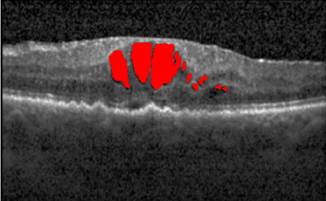 We have been working on automatically detecting the appearance of Cystoid Macular Edema (CME) in Optical Coherence Tomography (OCT) images. CME  is a buildup of fluids in the eye near the macula of the eye that can distort a person’s vision.  OCT is one of the main methods used by medical professionals to detect these edemas.

Our goal is to develop a system that can process large amounts of OCT images, automatically singling out images that show CME and quantify the cysts. See our step-by-step explanations: part two – denoising , part three – layer segmentation, and four – seed detection.

We can rephrase our goal of detecting the cysts as finding a closed line that separates the cysts’ pixels in the image from the rest of the image. If we define the scan image as a graph where every pixel is represented as a node that is connected by an edge to its neighboring pixels we could use the well-known graph-cut method, whose aim is to find on a graph where an image can be segmented into two groups – the cyst(s) and everything else. The graph-cut method evaluates each edge in the graph based on its score and chooses the edges that allow the segmentation with the lowest score possible.

Every node is connected to its Manhattan neighbors (4-neighborhoods) and the edges are given a score that is inverse to their intensity difference – i.e.the more similar the nodes, the higher their edges’ score. This ensures that the cut will be between very different pixels (as is the case on the edge that defines the cyst’s walls).

The edges that connect the source and the sink receive a score of infinity to ensure that they won’t be cut from the graph.

Finally a min-cut algorithm is used to find the actual segmentation. 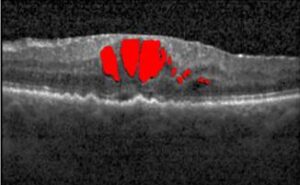 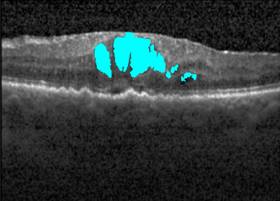 As we can see in the resulting figures above the detection of the cysts’ pixels is very accurate with small false detections in the boundary areas where the cysts are especially close to one-another. The results themselves are dependent on using good seeds and are increasingly more accurate when more negative seeds are used.

The network itself is composed of layers of mathematical operations that learn increasingly complex concepts from the images in an effort to learn to categorize them.

As an input our neural network accepts patches of pixels from within the retina. To generate those patches we first extract only the retina from the image, using the previously segmented ILM and RPE from the Layer Segmentation process. We further segment the retina using the SLIC algorithm, that was introduced in the Denoising process, into super-pixels. From each super-pixel we randomly choose a seed point which will be the focal point of the patch that represents the super-pixel.

Each super-pixel is labeled using manual annotation of the OCT scan and the patch that is generated from this inherits this label and is fed to the network.

The network that we use is very similar in its structure to the famous and widely used AlexNet network. Our network’s structure is as follows: 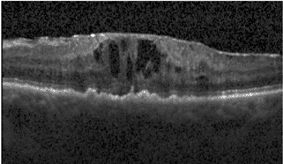 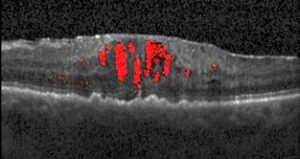 As we can see in the resulting images above, this deep learning method is very successful at finding the cysts themselves and most of their area. This is a remarkable result considering the small dataset that was used in the training process.

More information about the LeNet network can be found here