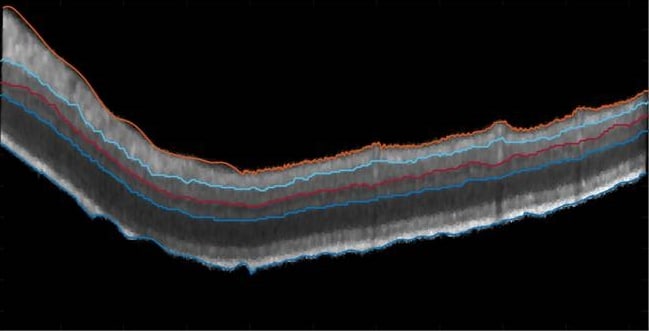 This is part three in our series of articles breaking down the automatic detection and quantification of Cystoid Macular Edema (CME). This is a buildup of fluids in the eye near the macula of the eye that can distort vision. We are pioneering a new method for the detection of cysts. We summarized this process in the first article – Hacking the Automatic Detection Process. Here is the third step of our method in more detail. If you missed it, part two – Denoising – is here.

Layer segmentation is the process of locating the different layers in the retina in the OCT scan.

The retina is typically divided into ten different layers:

The importance of this segmentation cannot be over-emphasized:  it allows us to measure each individual layer’s thickness, leading us to locate deformities, obstructions and a host of different pathologies.

In the case of cyst detection in OCT scans it has been suggested that each layer, and more importantly the cysts in each layer, have statistically significant textural features. Thus computational methods which learn the features in the context of the individual layers are useful for this kind of detection.

In an effort to build a consistent system for layer segmentation we can geometrically abstract the layers into a concept that lends itself to efficient search solutions. For that end we will consider a layer as a thin curve from one side of the image to the other with consistent intensity that can be differentiated from the layers above and below it.

This definition allows us to easily use the Bellman-Ford algorithm for finding the shortest-path in the image, using the intensity changes between the layers to weigh the changes in the path.

In our approach we focus on finding the retina itself by segmenting the first (ILM) and last (RPE) layers, and further segmenting the upper half (layers 1-6) of the retina where statistically the vast majority of cysts are found.

First we use the layer-segmentation denoising introduced in the [previous article] in this series.

We calculate the intensity gradient image and using the pre-segmented ILM and RPE layers we define the region of interest (ROI) as the area in the image between those layers.

Next we iteratively search the ROI for the layers using the Bellman-Ford algorithm, each time using the gradient image as the cost function and to give better weights to higher nodes (as to segment the layers one-by-one, from top to bottom).

As noted in the in the denoising article – the image’s Euclidean distance misrepresents the actual distance between the objects that are scanned which means that any method that refers to the image’s distance will automatically be skewed.

To counteract this problem when we search the layers using the Bellman-Ford algorithm we change the weights to reflect this misrepresentation, thus allowing the algorithm to more easily move vertically (as the actual vertical distance is smaller than the horizontal) and better locate layer deformities caused by cysts.

After achieving these good segmentation results, we could move on to the seed detection stage – described in part four of this series.