Optical coherence tomography angiography (OCTA) is a method which uses OCT to produce high-resolution volumetric images of the vascular tree in the eye. It has the advantage of being a non-invasive procedure. It is quick, and produces high resolution 3-dimensional histological images. 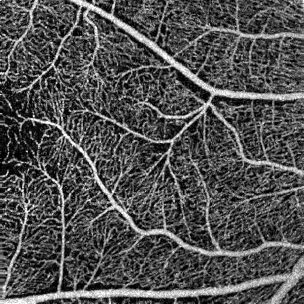 With OCTA a clear structure of the blood flow in the eye can be seen, which enables a better diagnosis of pathologies such as age-related macular degeneration, vein occlusion, and glaucoma. To create a map of the blood flow, OCTA compares sequential differences in the back-scattering of the light reflected from a specific cross-section of the eye. To obtain high resolution images, OCTA requires high-speed imaging. Due to the technical limitation of OCT machines, however, only a narrow field of view can be acquired as such.

An improvement in the amount of information obtained from OCTA is achieved over other methods such as Fluorescein angiography (FA). In the later, a fluorescein dye is injected to blood circulation to increase contrast during imaging when illuminated by blue light.

The procedure of FA is invasive, long (10-30 minutes) and prone to measurement error. Moreover, using dye in FA obscures the detection of lesions and diagnosis of their extent and depth, and does not allow easy segmentation of the different layers in the retina. In contrast, OCTA avoids this.

A further improvement in resolution of OCTA can be achieved by employing phase-contrast OCTA. Phase-contrast OCTA improves the resolution by at least an order of magnitude over FA and time-domain OCT which achieves sub-micrometer resolution. The way it works is by splitting a low coherence beam into two using a prism, the splat beams then pass through the tissue in two close paths and recombine upon exiting. All differences in phase between the two beams are translated into changes in the polarization of the signal which are later translated into phase-contrast OCT images.

Three-dimensional blood flow can then be visualized in OCTA by detecting regions of differential phase variance in multiple adjacent two-dimensional scans (b-scans) of individual slices of the retina. This allows physicians to quickly and accurately detect pathologies related to vascularization in a non-invasive manner which is practically free of side effects and clinical hazards.