Trajectory tracking of a fluorescent tag

Limitation of microscopic modalities to directly observe sub-cellular structures has led to the development of indirect measuring procedures based on single particle tracking. Analysis of trajectories of a fluorescently tagged particle allows indirect estimation of the spatial organization of the domain confining its motion.

Single particle trajectories of several tagged monomers (molecular blocks forming more complex molecules, called polymers) can reveal the interaction between organelles (tiny cellular organs, suspended in the cytoplasm of a eukaryotic cell) like telomeres (the extremities of a chromosome, which protect it from deterioration) with the nuclear membrane or among themselves. Quantitative temporal information, such as the mean first arrival time of tagged particle to a region of interest can be extracted. One such example is the study of the average time it takes a virus to travel from the cell membrane to a nuclear pore.

Learning the behavior of bio-molecules and the interaction they have with other molecular structures in their native environment gives us valuable information about processes like viral infections of cells, protein-DNA interactions and other complex biological processes. 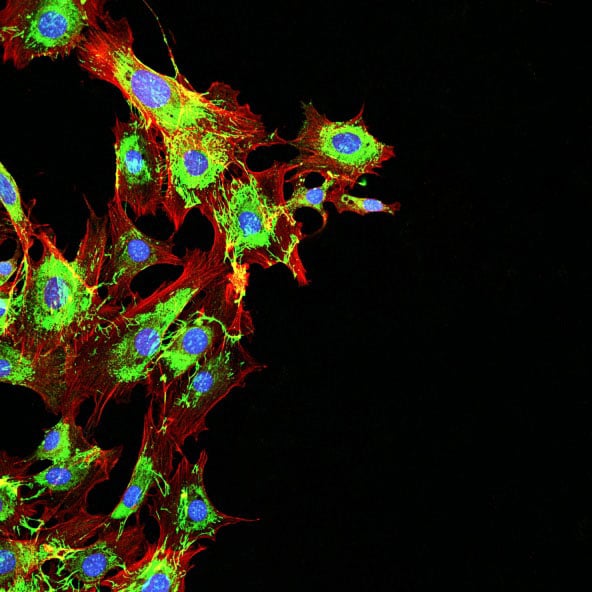 Tracking of a fluorescent tag can be initialized by either manually marking the point of interest, or automatically detecting all tags in the first frame. The difficulty in detecting and tracking particles in dynamic live microscopy of fluorescent tags resides mainly in the high levels of noise. Increasing the signal-to-noise ratio of tags in images is achieved by filtering the image with Gaussian or Laplacian-like kernels. The use of these kernels is motivated by the Gaussian intensity signature of the tagged particle.

Localization of the tagged particle in each frame is performed after stabilization and alignment of the image sequence. This step is required to compensate for small sample motion throughout the acquisition period. In a sequence of segmented tag positions, tracking is regarded as the process of connecting the dots between corresponding tags of subsequent frames.

The task is to find an optimal path in time representing the trajectory. The problem can be regarded as a minimization of a cost function, having penalizing term on sharp jumps in particle displacement. In addition, image intensity levels are integrated into the cost function to favor bright spots. The minimization problem can be solved in the framework of dynamic programming.

The result is a path with minimal cost, representing three-dimensional coordinates of a fluorescent tag particle throughout the image sequence. Tracking objects in a sequence of images is one of RSIP Vision’s fields of expertise. We have been utilizing dynamic programming and graph theoretic approaches to track not only tags, but also full organs, like in this heart monitoring system project.