Human Immunodeficiency Virus is a double-strand RNA retrovirus, which translates into a DNA by reverse transcription in the cell cytoplasm and later integrated into the genome within the nucleus. The integrated viral DNA harbors genes which remains at most dormant until an initiation of the immunodeficiency (AIDS), which can take place several years after the first infection. 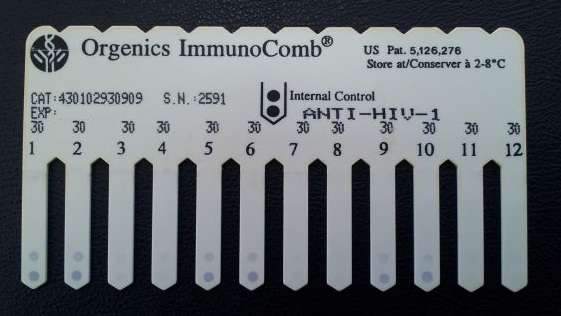 Screening for HIV for the adult population is becoming a standard recommendation of the health systems in the western world. The detection of HIV in many patients carrying the virus is estimated to take place only at late stages of the disease, partially due to lack of awareness on patients’ behalf.

Detection of HIV is performed by testing for specific antibodies against the viral infection. Several tests must be performed to affirm and validate the presence of the virus by taking serum and plasma samples. Despite rigorous examination in laboratory, false positive detection still occur, which generate devastating personal consequences. To facilitate examination, Orgenics have developed an examination card consisting of comb like 12 test tubes, which received FDA approval in 2013.

The rapid examination comb-like card, termed ImmunoComb®, allows simultaneous test for HIV type 1 and 2 antigens. In the examination procedure, the comb is inserted into 12 well plates with samples, and a system of 3 spots on each of the comb’s arm indicate the presence of HIV type-1 and 2 antigens. The order of the circular spots is the indicator giving indication for the three cases: no HIV presence (top spot), HIV 2 presence (top 2 spots) and HIV 1 presence (top and bottom spots). Other cases are also represented (see figure below). 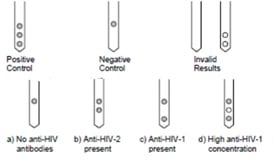 The bottleneck in the speed of the diagnostic reading of HIV is the time of the analysis of the 3 spots pattern. Due to low contrast markers, test result might sometime appear ambiguous. To automatically and accurately detect low contrast markers signaling the presence of HIV antigens, RSIP Vision have created an automatic detection software for Orgenics’ ImmunoComb. RSIP Vision’s algorithms are able to detect the newly forming circle even at the initial stages of the test. Our software provides fast, accurate test results without the hazards of human error.

RSIP Vision’s image processing solution, combined with the product by Orgenics, adds to the robustness and usability of the ImmunoComb test, making the diagnostic reading of HIV tests quick and reliable. Automatic detection of low contrast markers can be performed along with the pipeline for use of ImmunoComb, and the automatic fast detection algorithm of RSIP Vision greatly reduces total analysis duration time.