Safety control and accident prevention systems in cars have gain significant development over the past decade. Advanced Driver Assistance Systems (ADAS) are now commercially available, and quite frequently found pre-installed by car manufactures. The goal of these system is to provide vehicles with sensors capable of detecting and acting upon the analysis of dangerous situations, where the driver would not be able to avoid a collision. 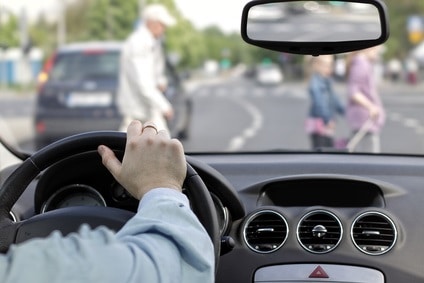 Driver and pedestrians at a crosswalk

Detecting pedestrians, initiating an alert and acting upon their sometimes unpredictable behavior can certainly be counted among the most challenging tasks of ADAS operating in urban environment. In this context, the full potential of ADAS systems can be realized by including pedestrian tracking, orientation and intention prediction.

In ADAS, vision-based alerts have occupied a central role in assessing critical situations. Specifically for pedestrian detection, visual information is critical to distinguish humans from other moving objects on the road. The actual detection of pedestrians do not necessarily requires a full extraction of human features, but rather the recognition that an object is human. However, for intention prediction, contextual information with pedestrian models should be incorporated.

Owing to complex environment and the variety of situations to be analyzed, deterministic computer algorithms are prone to many false positive detection. Since the response of ADAS to a false positive detection might lead to grave consequences, reduction of erroneous detection to its minimum is posed as a strict demand of performance. A much better solution is offered by algorithms based on machine learning, which have been shown to be far more robust.

To utilize such robust machine learning, coupled with computer vision methodologies, we suggest to employ a cascade of classifiers. Each classifier is trained to model a different body part of pedestrians, given a candidate target. The targets are detected using state-of-the-art algorithms based on histogram of gradient and Haar-like features. These methodologies have been shown previously to be able to operate in real-time, as fit for the fast response time required by ADAS.

The recognition of a candidate object as a pedestrian is done by majority vote of several classifiers. Imposing strict threshold value on the outcome enables to restrict the levels of false positive detections. The adjustment of recognition values is important when contextual information can be integrated into the system. For example, driving in urban vs rural roads does not require the same level of alert. Localization of the car in either of these environment can thus be used to dynamically adjust the alert levels in ADAS.