This article is the second part in a series of three articles about sensors used by the automotive industry to allow perception on autonomous vehicles.

RGB cameras, LiDARs and Radars are the three main sensors used by the automotive industry to maintain the perception for autonomous vehicles at various levels of autonomy. Each of these three different methods has advantages and disadvantages, so that the ideal system would be a combination of all three. 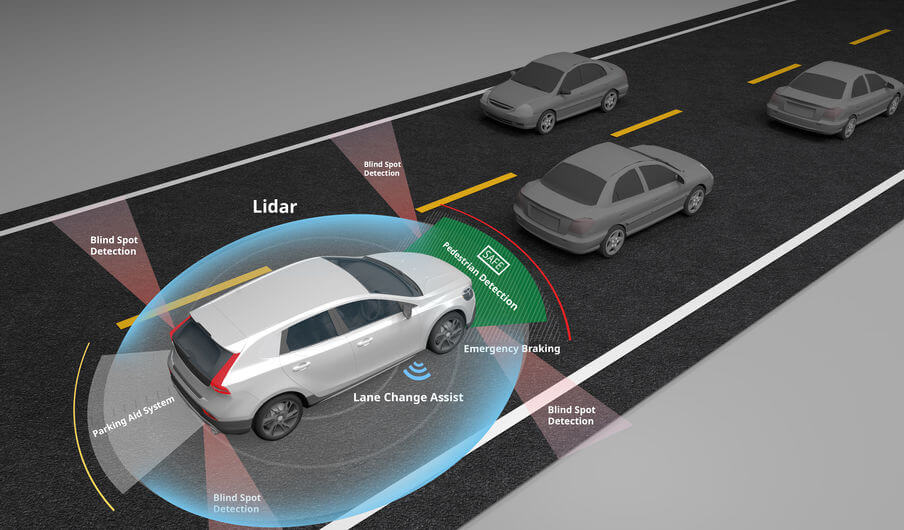 LiDARs are actually laser scanners. They emit many laser beams at a high speed in all directions and receive the return signals with time elapsed since it went out, providing information about the distance of the object. The output of the LiDAR is a 3D dot map, in which every object is found at a given position and direction. This feature is intrinsic in the LiDAR system and it doesn’t need any particular process to occur, presenting an advantage with regards to the cameras. The large quantity of laser beams that can be emitted enables a good resolution, so that we can measure longer distances with much higher precision. In addition, LiDARs work under almost any weather condition, losing performance only with humidity and rain.

The main disadvantage of LiDAR, at the moment of writing these lines, is its cost. Even today, when this technology is undergoing massive developments, it is still much more expensive than RGB camera technology. While RGB cameras do not require significant changes in the production lines of cars, LiDARs need to be uncovered, meaning that they need to be placed on each side of the car (which is very expensive) or one LiDAR on the top of the car, disrupting the car styling. In addition, the quantity of information gathered by a LiDAR system is huge. A vehicle driving at regular speed will need to use high speed lidar scanner in order to detect all the objects on its way. Thus, the amount of the received dots is very high, requiring a high processing capacity and a high power supply of electricity, making the cost of this solution even more expensive. LiDAR cannot classify objects due to missing color information and features.

September 18 to 22
Stay informed for our next events